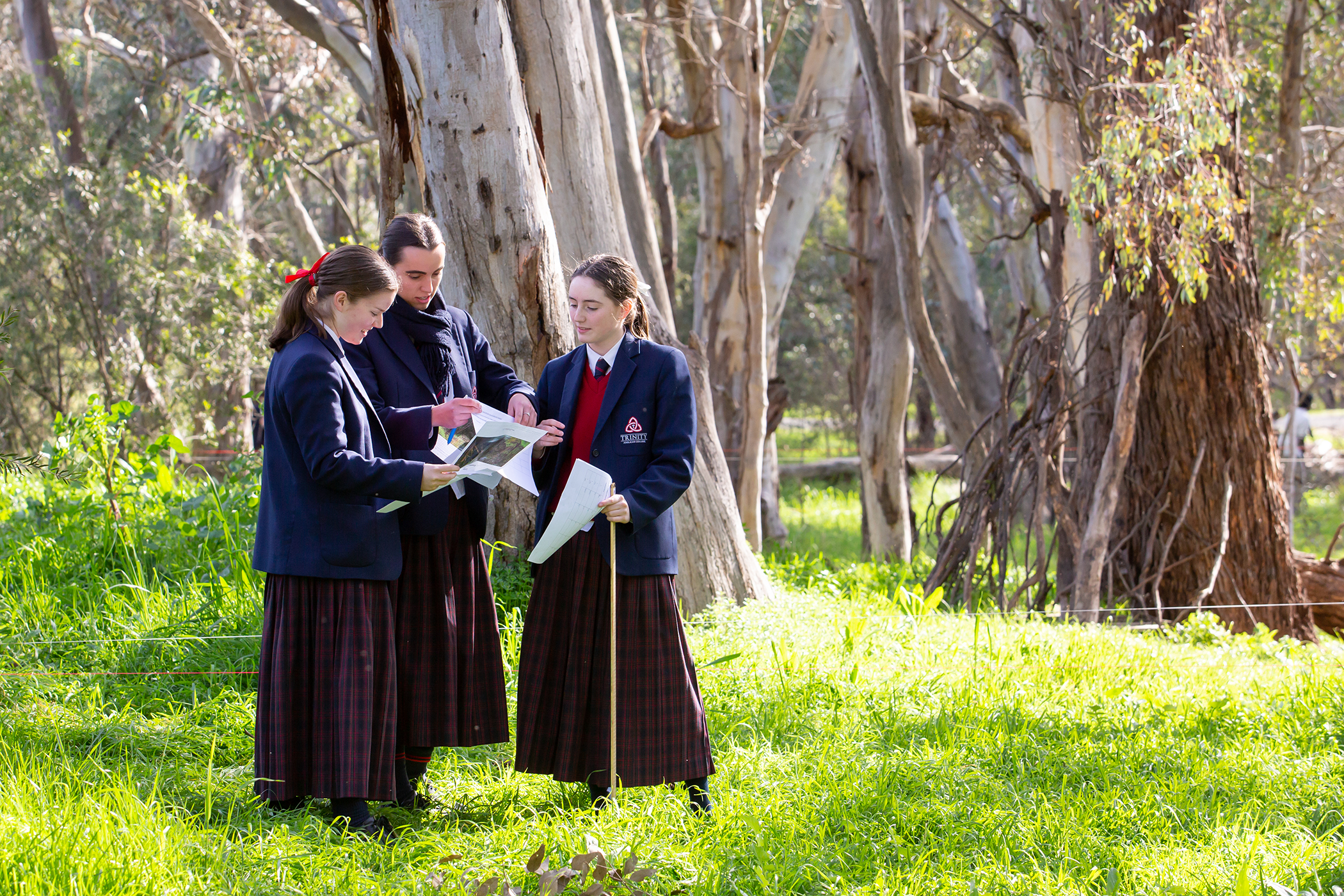 The Rite Journey program was one of the highlights of my year during year 9. Through assessments, stressful times and unsteady friendships the Rite Journey was a rock for me. We would come into our classroom a few times a week and talk about what was relevant in our world at the time whether that be how we were feeling, body image, relationships etc. For me, the year was a process of understanding myself and how to grow as a person gaining empathy and strong bonds with girls I’d never had the chance to really talk to but the great thing about the rite journey was that it was different for everyone. We all changed in different ways and strived in different areas. With the fortnightly challenges that involved rock climbing, yoga and mountain biking, we had the opportunity to push ourselves out of our comfort zone and have fun with our friends.

The Personal Best projects gave us the opportunity to be creative and try something new or show off something we were good at that our peers weren’t aware of.  Personally, after my year of doing the Rite Journey I felt like I understood myself and the girls around me so much more and had a strong urge to help others in the future.

The Rite Journey is a beneficial program that transforms the teens of today into intelligent, confident and self-aware young adults. Through the process of the Rite Journey, we were able to further develop our connections with our peers, teachers and even our parents. We had open discussions as a group about issues and topics in society such as equality, sexuality, puberty and everything that goes along with developing into a young adult. Within our class, we broke down stereotypes and barriers and spoke about how we should always be accepting of everyone no matter what their gender, sexuality or race. I was able to develop a close connection with each of the girls in my Rite Journey class, at the beginning of the year we struggled to speak up and share our honest thoughts and opinions with the class but by the end of the year, we got to a point where we ran out of time because we had so many ideas to share. Throughout the process of the Rite Journey, I most enjoyed the bonds I was able to make and further grow, meeting as a group multiple times a week gave us a chance to connect in person with the people in our year group and talk about the things that were on our minds. Rite Journey was a program that I really enjoyed and I felt that myself and the rest of my cohort really grew from the experience.

Learning at Home with Georgia

Less time travelling and being able to finish school and then ride the horses are just some of the benefits of school from home.

After completing a week of being a Trinity student but not coming through the school gates, there are things that are great and things that we will all be missing. What has been great has been the way that we have been able to be in a virtual classroom together.

Seeing the teachers and having them explain things to us is pretty much like normal, and the mute buttons help too!

It is also helpful to be able to be closer to the pantry, fridge and kettle, and be able to raid them all the time!

The best thing for me has been the extra time that I have, which I have used to ride my horse. If the weather is nice, I can go out and do that in the early afternoon and then make up any work later on that day.

The Australian Bushfires by Annalise Conibear

Some days are indelibly etched in your memory. December 31st 2019 is the day I will never forget. The daily checks, our phones telling us where the flames will strike next. The thought of us being attacked never dawned on me. Until the morning I woke earlier than expected. The morning my sister and I were planning on surfing, the morning thousands of lives changed forever. My family gently awoke me, guiding me outside, preparing me for the news.

I stared up at the sky which was filled with different shades of grey and an oniums red enlacing through each other. At first I was filled with awe, in a weird way it almost looked beautiful. A painting in the sky.

“Mogo’s gone” my dad said and my head snapped towards him, the awe immediately being replaced with dread.

“What do you mean gone?” I said dubious. Surely not, we had only been there a few days ago. It couldn’t be gone.

I don’t remember much more from that conversation, only that he was right. The small town over, was in fact gone, more than half of the main street burnt to a crisp. The adrenaline coursed through my veins as I bolted through all of the rooms. Taking what couldn’t be replaced. What could you take if you only had 2 minutes?

The small sports club opened their doors to the frightened residents fleeing from their home as they took what they thought were their most prized possessions. The carpark began to fill with caravans, horse floats, trailers and boats. Their horses, puppies, cats and even the squawking parrot from next door depended on their owners for safety. For many this would soon become their only home for the next few days. Everything they own turned to ash.

Babies screaming, mothers begging their children to stay inside, grandparents with oxygen masks. In other words, chaos. We looked behind to the hill, black smoke roaring, dancing through the air. Loud crashes pierced the air as gas bottles burst.

The only thing we could do was hope.

After 4 hours of hearing the helicopters blades whir my body became as stiff as the concrete I was laying on. I decided to take a walk, only to turn the corner and notice new flames. Across the oval was our escape, the ocean, something the fire could never touch. If this small fire picked up, and the other fire came over the hills, we were trapped. The wind caused the flames to engulf the small trees and bushes around. Thousands of evacuees were panicking.  My father started to walk over, my instinct was to follow him. How could I help? Surely I could do something. However he told me to stay and I knew that as brave as I wanted to be, he needed me to stay. Telling me four words that could’ve been the last; “look after your mum”. As he vanished into the smoke haze, my heart fell heavy. I’ve seen the movies, I’ve seen what Hollywood can make of someone losing a family member. But in the real world, I closed my eyes and prayed. My father is my twin, we are so much alike that he will always be my greatest role model, the one that truly understands me. Losing him would be crushing and I can’t imagine facing the future without him. I begged for God to protect him. Pleaded with all my life that he will be okay. Because in that instant, the southerly wind came. The deafening blare of Elvis’s engine boomed through the sky. Who knew that an orange machine could evoke so much relief. The smoke started to thicken. It filled my throat and stung my eyes, turning a deep red colour that almost felt apocalyptic. I raced back to my family and we moved everything inside. As I looked back across the oval to where my father was, I realised how heavy the smoke actually was. I couldn’t even see the oval. My heart started to beat out of my chest, the smoke filling my lungs and making me feel foggy. Every time someone would come in through the door the smoke would gust in and fill my lungs once more. Everyone would start yelling at them for letting the smoke in but I was just happy they were making it back safe, and disappointed that the person walking through the door wasn’t my dad.

The ringing of my phone brought such triumph as I saw who it was. Danielle. My eldest sister was at home, working- not been given the chance to endure what the Batemans Bay residents were. I was glad she was safe in Albury. However, as I answered the phone, her cries sent shivers down my spine. The million questions raced out in the space of 30 seconds. I calmed her with the only words I knew about the situation.

My voice began to shake, my lip quivering. At least I could blame the smoke for the water that was flooding out of my eyes.

The squeaky door became a norm to my ears, my head resting on the shoulder of my older sister, Monique

“Hey chook” a voice so strong instantly brought joy to my heart. I raced over and gave dad the biggest squeeze I could, never wanting to let go.

It’s not your possessions, dream home, even your car that’s important. It’s your faith, family, friends, neighbours and people you have never even met.

Some people say you need 20/20 vision but I say the 2020 has not looked like a great view so far. But you’re right. 2020 vision is essential. It has forced me to reassess my whole world view on possessions, relationships, priorities and recalibrate my life. 2020 has brought forth many traumatic experiences; bush fires, droughts and COVID-19. However, as my dad always used to say; I’m not scared of dying, I’m scared of not living.