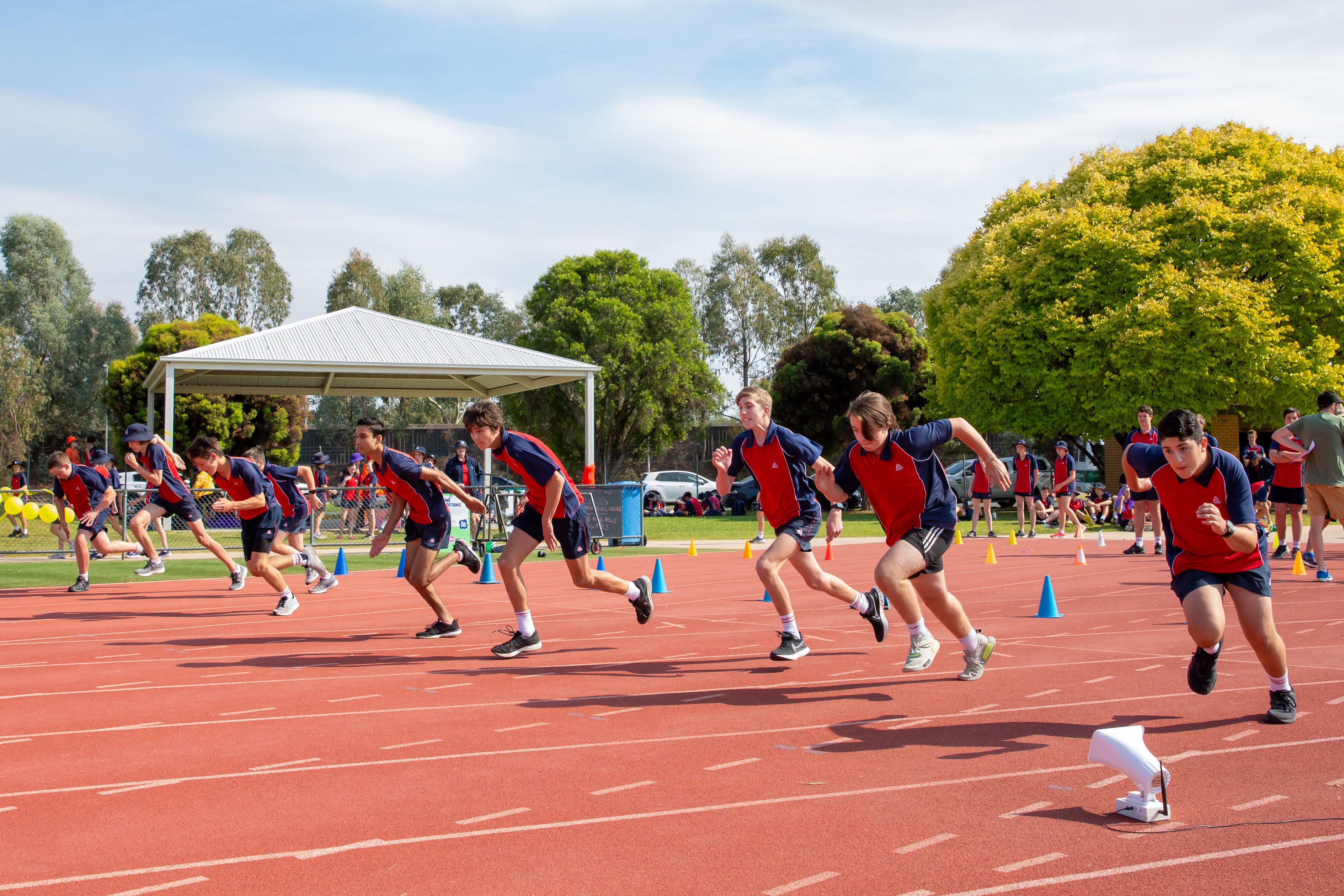 The spirit of Trinity comes to life through our College House system which brings together our students from different year levels for pastoral care, mentoring, sport, off-campus activities, and religious education and expression. Your child will belong to one of the six College Houses.
Our houses are an important part of our community life and have provided students an opportunity to build connections with one another.
All family members are assigned to the same house.

The story of the Soldier

Our College Houses are all named in honour after local World War 1 veterans from the Thurgoona area.

Norman Geoffrey Rosborough grew up in Thurgoona, attended Thurgoona Public School and won a scholarship to Albury High School.
His enlistment papers show that he joined the Australian Imperial Forces in September 1915 at the age of 18. Norman Rosborough disembarked at Alexandria in Egypt and with his unit joined the British Forces. He sailed or France, disembarked at Marseilles and served as a gunner in various areas until he was killed in action in the field south of Ypres on 23 July 1917.
For his services her was awarded the 1914/15 Star, the British War medal and the Victory Medal was awarded posthumously and sent to his father.
Norman’s name is recorded on the Menin Gate, along with other soldiers who have no know grave.

George Jacob Hoffman joined the Australian Imperial Forces on 15 February 1915 at the age of 34. His service records shoe that he was absorbed into the First Light Horse Regiment while in action on the Gallipoli Peninsula in late August 1915. Following withdrawal from Gallipoli he as transferred to the 12th Light Horse, returned to Alexandria in Egypt and then saw active service in a range of engagements against the Turks on Moasca, Abasan and the famous Australian Cavalry charge on Beersheba.
George returned to Australia from Egypt on the HT Morvada and was discharged in Sydney on 29 August 1919.
He was awarded the 1914/15 Star, the British War Medal and the Victory Medal.

George James Petts grew up in Thurgoona and joined the 8th Light Horse Brigade on 27 December 1916 aged 37 years.
He embarked from Melbourne in February 1917 and disembarked in Suez in April 1917.
George was a trooper who saw active service against the Turks in the desert in Egypt and Palestine in Moascar, Abasan and Belah.
After a time of hospitalisation, he was sent to the School of Farriers at Jericho and trained as a shoeing smith and spent the rest of his service shoeing the horses of the Australian Light Horsemen.
After the cessation of hostilities, George embarked for Australia and was discharged on the 22 August 1919.
He was awarded the 1914/15 Star, the British War Medal and the Victory Medal.
His service records showed that he volunteered for active service again at the outbreak of World War 2 but was discharged in 1940 as ‘too old’.

Kenneth Lowrie Kelton enlisted on 12 August 1915 aged 19 years.
Like Norman Rosborough, Kenneth was a member of the 13th Battery. It is likely that they were friends as the embarked for Suez and Marseilles together where they were deployed for active service on the Western Front.
Kenneth’s records note that he was engaged in fighting at Rouelle in France in 1917. His actions were gazetted and as a result he was awarded a Meritorious Service medal by King George VI in 1918, this led to field promotions to Corporal and then to Sergeant. After the Armistice, Sergeant Kelton returned to April in April 1919.

Leslie Austin Kimball enlisted on 24 August 1914 aged 22 years.
He embarked from Sydney on the HMAT A16 Star of Victoria on 20 October 1914 and disembarked at Gallipoli in May 1915. He proceeded to join the Western Frontier Force in January 1916.
Leslie was awarded the 1914/15 Star, the British War Medal and the Victory Medal.
He was also awarded a Military Medal for Bravery in the Field with his records noting:
At Kuwellfee Ridge his Brigade was in Action, and this N.C.O was ordered to go back with his No. 6 Gunner and bring up ammunition, and when bringing it up through heavy machine gun fire, No. 6 Gunner’s Horse was shot from under him and he lay wounded under his dead horse. Sgt. Kimball galloped in under heavy fire, gave his ammunition over to his Officer, then galloped back and rescued his wounded Comrade from under his horse and carried him through heavy fire to a dressing station. This gallant deed of the N.C.O is worth of the highest praise.
Leslie embarked Port Darwin for return from Suez on November 1918 and was discharged in March 1919.

William Lankester enlisted in August 1916 at the age of 35 years.
He embarked from Fremantle on board HMAT A35 Berrima on 23 December 1916 and proceeded to France in July 1917.
He held the rank of Private and saw active service throughout England and France in the three years that he served.
William was awarded the 1914/15 Star, the British War Medal and the Victory Medal.
He was discharged in May 1920.

*When researching William Lankester, it was uncovered that his surname had been spelt incorrectly. This will now be corrected on any school collateral.

Within our school grounds we are honoured to have our very own 'Lone Pine'.
This beautiful tree, planted in April 2004, is a direct descendant of the Lone Pine of Gallipoli.
Our tree and plaque commemorate those who died on the battlefields at Gallipoli during World War One. 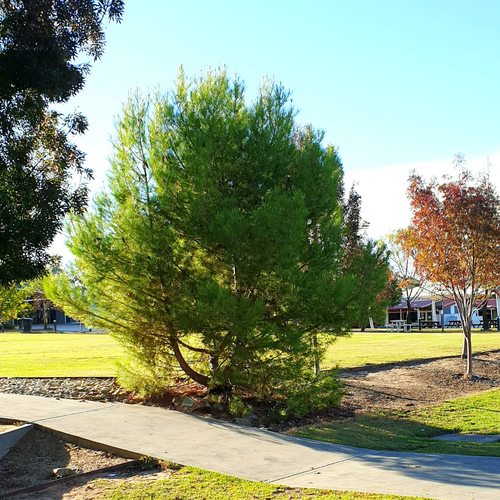 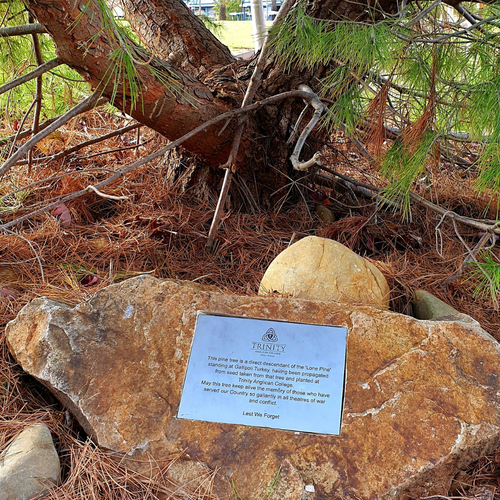 The story of the Lone Pine
On 6 August 1915 the 1st Australian Infantry Division launched a major offensive at Plateau 400 on Gallipoli. The ridges, once covered with the Aleppo pine, had been cleared to provide cover for the Turkish trenches, leaving just one, solitary pine. The area became known as Lone Pine Ridge.
After three days of brutal fighting the Anzacs succeeded in capturing the enemy trenches, but this bloody action cost the Australians 2,000 men. The Turks’ losses were estimated at 7,000.
After the battle, Lance Corporal Benjamin Charles Smith, 3rd Battalion AIF, collected several pine cones from the branches used to cover the Turkish trenches. He sent the cones home to his mother, Jane McMullin, in remembrance of his brother Mark, who had died in the fighting on 6 August. From one of these cones Mrs McMullin sowed several seeds, and successfully raised two seedlings. One was planted in Inverell, where both her sons had enlisted. The other was presented to the Australian War Memorial, to be planted in the grounds in honour of all the sons who fell at Lone Pine.
(from the Australian War Memorial website)